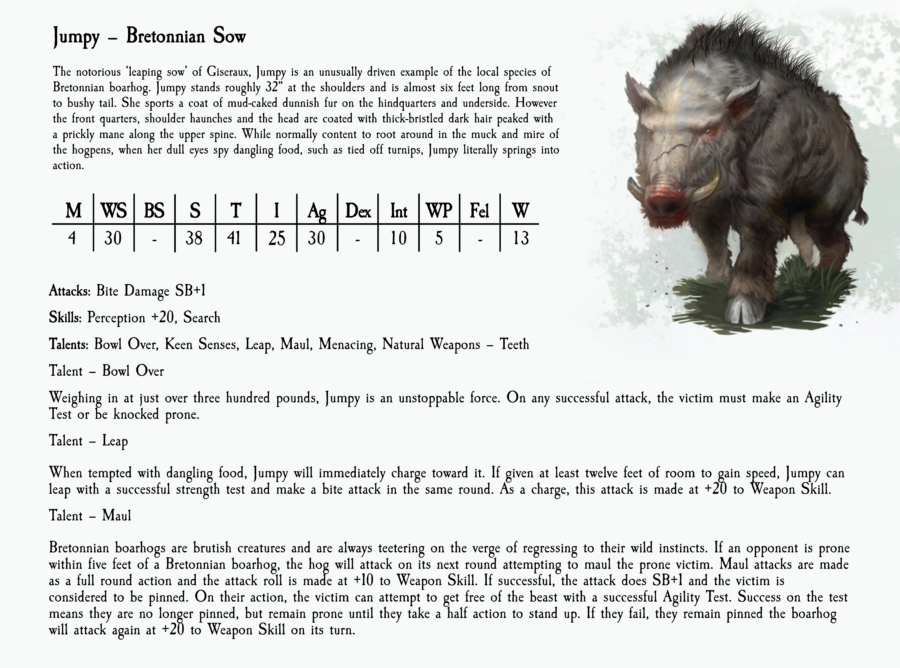 In the role-play setting of Warhammer Fantasy, the nobles of Bretonnia are well known as being effete and uncaring, viewing their peasants as little more than human tools made for hard work like any livestock.

The mass of serfs all look alike to them; dirty, shabby, and uncouth.

So when the nobility has a threat arise that needs to be dealt with discreetly, they often hold games to test their subjects and the winners are ‘rewarded’ by being taken from their humble drudgery to face the greater dangers of adventure.


In the province of Giseraux, the Marquis Waldon de Hasparren had an infestation of goblins that had begun to steal sheep and even the occasional calf from the rural herdsman. Hasparren, however, was a very poor knight and his entourage of able peasants were too precious for him to spare on this dangerous task.

So he approached the nephew of the Duke of Giseraux, a marquis named Faustus de Mane who had extensive holding and owed him a boon. De Mane, who desperately needed to raise the lagging morale of his overburdened peasantry agree to roust up some worthy peasants to loan to the Marquis de Hasparren.

Thus, the games known as the Autumn Gauntlet were held at de Mane’s holdings in the countryside northeast of regal Giseraux.

The players for this campaign were various peasants and down-on-their-luck freemen.

Among the competitions the players had to endure was the ‘Hungry Mire’. In this event, players had to cross some twenty feet across a foul pig sty on a thick rope fastened rather slackly to two large mast posts on either side. Beneath them, the well-trod and stinking sty was stocked with several large boarhogs, deprived of food for a full day.

As they climbed the mast, the nobles and guilders pressed up to the heavy wooden fence that hemmed in the hungry boars, cheering and jeering and making subtle wagers on the contestants.

Near the tops of the masts, a small platform was built and there waited some of the De Mane’s roughest men who advised them it was best to cross hand over hand. They then took a small length of rope and tied it around their ankles. Dangling from each end of the rope was a tightly bound turnip.

As they crossed the hogs surged forward, roughly jockeying for position in the path of the struggling feet and their drooping payload of wonderous turnips.

Crossing the pit required three successful strength tests. If the test was failed, the player could opt to make an agility test to manage to keep hold of the rope. All the while, the hogs took their turns trying to seize the turnips.

After the second strength test, the mocking crowd began to roar louder and the excited cry of “Make way for Jumpy!” could be heard above the din and a lumbering sow charged headlong at surprising speed, bowling the other hogs out of the way, its dim eyes transfixed by the dancing turnips just overhead.

It was satisfying to watch the players eyes grow wide with fear. 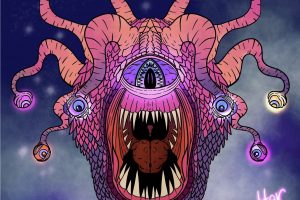 This is the Besunsetter because of the sunset colors! Colored[...]

This is a Knight Castellan that I have painted for[...] 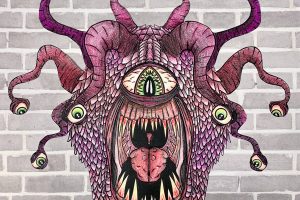 Beware the Beholder was colored using the medium of colored[...]