Moonlight filtered through ruffled curtains and pooled among the prized possessions of a five-year-old. Legos littered the floor, plastic dinosaurs stood ready to charge at ranks of cowboys, and pretty pony princesses took tea with Luke, Leia, and a Stormtrooper. On the bedside table, a Professor Plotz Storytime Clock ticked away between a pile of the writer’s well-worn books and a microscope.

When Professor Plotz pointed at 12 and 3, a sound erupted from the closet.  It was high –and loud!  As the crescendo rose, the girl stirred. Her face bunched. Her fists clenched. She yanked the covers over her head and huddled under the blanket for a moment before bursting out with a low growl.

The piercing scream was joined by other voices, reaching an impossible harmonic that defied any normal musical scale to claim it. The girl glared and covered her ears until the sound dissolved into a raucous and nonsensical sing-a-long proclaiming the merits of slurping gloop soup.

Never taking her eyes off of the closet, she dropped to the floor, rolled up the sleeves of her blue fleece footed jammies, and slid the aluminum bat out from under her bed.  She crossed to the closet, flung it open, and addressed the darkness: “Stop wailing.”

A few rustled retreats suggested that at least some of the singers had retired for the evening. The girl tilted her head, listening. Silence. She took a step back and moved to shut the door, when a tiny green-haired creature in a red and white striped jumpsuit and blue boots bounded into the room. “Sleeches don’t wail – why goodness me, NO!”

A nearly identical creature followed it. “We sleeches are screechers, as EVERYONE knows!”

The girl squeezed the bat. “I’m gonna count to three. One.”

“We sleep through the day in our stripey-striped breaches,” sang Sleech One.

Sleech Two chimed in: “Dreaming of cherries and cumquats and pea-“

She brought the bat down onto the green mop of hair, pulverizing the creature with wet and undignified splutch. “Three.”

A nerve twitched on the girl’s temple as Sleech One’s eyes bugged from their sockets.  “You killed Sleech Two – sniff sniff and boo hoo–”

The girl swung the bat up, ready for a second strike.  “Yes?” A drop of blue goop oozed down the barrel weaving a sad cerulean river, quivered, then fell, splatting among the freckles on her nose. She licked it off.

Sleech one fiddled with its jumper’s yellow button0. “…And…er…Sleech One…Sleech One…”

“What did Sleech One do?” The girl’s lips barely moved.

“Sleech one…” It glanced at the pulpy mass of Sleech Two. The creature swallowed. It shook its tiny goop-flecked boot, sending one of Sleech Two’s errant eyeballs bouncing into a corner. “Sleech one…learned to whisper and gave up its screeches.”

The girl stared for a moment at the creature, smiled, and slowly lowered the bat.  She stepped forward and put her hand on the closet’s knob.  In one quick motion, she stomped on Sleech One and ground her heel until the gurgling stopped.  She turned, and to the room in general said “Anyone else not understand ‘school night?’” 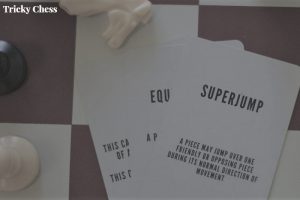 At the onset of the quarantine, I began tinkering with[...] 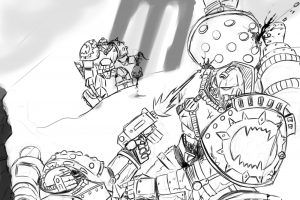 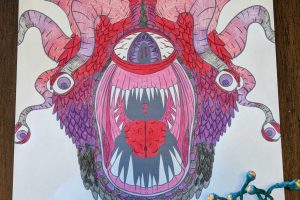 Beholder colored with colored pencils, pictured here with a beholder[...]